I’ve been trying lots of things with RC, but perhaps not flying so much. Some things that I noticed:

Based on that I have realized some things I wish I knew from the start:

So instead of spending hundreds of euros on stuff of which half is now not working or not that useful, I could probably have spent 150 or so max, for 2 simple quads, and a good transmitter that can be modded to control both. Try not to spend more than 40 euros on your first quad! And make sure you have at least one model for which you can buy spare parts locally (Hubsan X4 in my case); it really sucks having to wait weeks for spares from China when you just want to fly.

So right now I fly my Hubsan a bit indoors, the motors are still doing fine after more flight-time than the Ladybird. The Ladybird meanwhile is grounded and waiting for replacement motors. That will be my last attempt to fix it, so i hope they last a while. After that I’m thinking of going for an affordable brushless motor quad (like an RC-Logger Eye One Extreme); the tiny coreless motors are way too unreliable to keep going seriously..

Here’s what my modded ladybird looked like before it broke: 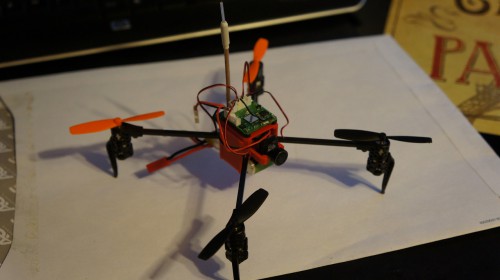