This is the first post in a series of many where I’ll be posting updates on my progress creating a small Unreal Tournament 3 level using UT3’s Asian assets. I picked “Shaolin” as an extremely cheesy name and decided upon a castle/temple on a cliff at the edge of a waterfall. I got my idea from looking at CTF-Relfection, a map which i’ll be taking most my cues from.

I made some sketches first, just to put down on paper what the general thing would look like:

After that I drew a quick map, nothing too accurate. Some things changed going from the sketches to the map already. I made the main building wider, spaced the central buildings apart and decided the gate to be larger. Most of the parts of my map are in some way based on parts of CTF- Reflection. Here’s my rough floorplan with screenshots of the locations from CTF-Reflection: 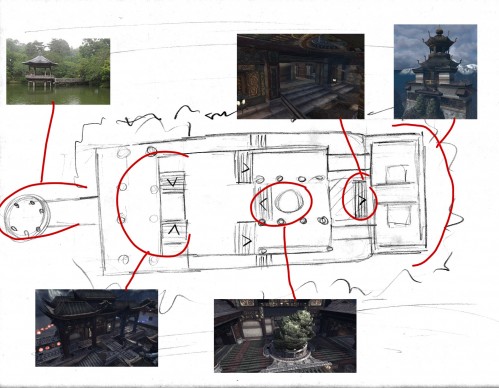 With the plan done, I started blocking out my level in the editor. I looked for the waterfall mesh and some rock meshes which I could use. Having two editors open at the same time helped me find assets used in CTF-Reflection, so I could then place them in my level (not recommended on weak pc’s!). I didn’t use BSP for this, since these are really big meshes that really define the level. After that I used BSP brushes and a few more meshes to get a basic layout done. Here’s how I currently stand: 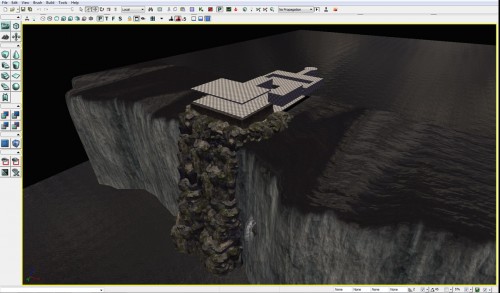 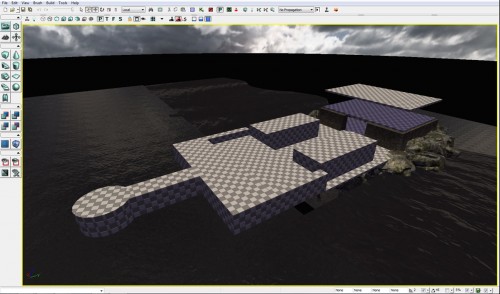 You can already see a problem here; the waterfall mesh isn’t made to connect with a waterplane behind it, so I’ll have to create a new waterfal mesh and probably change the material(s) as well.